Former first overall pick Anthony Bennett has reached an agreement on a new contract with the Nets, reports Shams Charania of The Vertical (Twitter link). According to Charania, it’ll be a two-year, minimum-salary contract, with a guaranteed salary in year one. 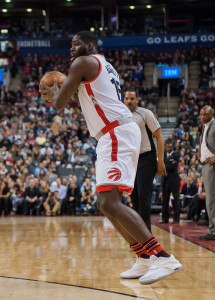 Michael Scotto of The Associated Press (Twitter link) first reported that talks between Bennett and the Nets were in the “advanced stages,” with the two sides nearing a deal. He confirms that an agreement is in place, tweeting that the second year features a partial guarantee.

We heard over the weekend that Brooklyn had interest in Bennett, and that wasn’t the first time the team and player had been linked. The former UNLV power forward was invited to the Nets’ mini-camp for free agents in late May and seemingly made a positive impression on the club’s decision-makers. Bennett also

The first player taken in the 2013 draft, Bennett never developed into the sort of player the Cavaliers hoped he would. After one season in Cleveland, Bennett was sent to Minnesota as part of the trade package for Kevin Love. Last season, the Canadian appeared in 19 games for the Raptors, averaging just 4.4 minutes in those contests.

The Nets remain well below the salary floor, and Bennett’s deal will only take up a small portion of the team’s cap room, so the team still has flexibility to spend.