JULY 21ST: The deal is official, the team announced via Twitter.

JULY 18TH: More than a week after reporting that the Pacers and Aaron Brooks were in “advanced discussions” on a one-year contract, Shams Charania of The Vertical tweets that the two sides have reached an agreement. According to Charania, it’ll be a one-year, $2.5MM deal for Brooks in Indiana. 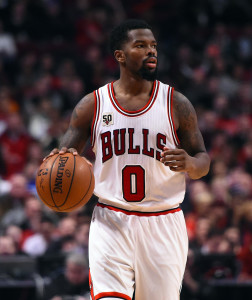 A well-traveled NBA veteran, Brooks will be joining his sixth team, having already spent time with the Rockets, Suns, Kings, Nuggets, and Bulls. Most recently, the 31-year-old played 69 games for Chicago last season, averaging 7.1 PPG and 2.6 APG in a backup role.

In Indiana, Brooks will be a part of a revamped point guard depth chart, with Jeff Teague expected to be the starter. The Pacers acquired Teague in a three-way trade earlier this month that sent George Hill to the Jazz, and they don’t appear anxious to re-sign last season’s backup, Ty Lawson.

Despite an active offseason that has seen the club acquire Thaddeus Young and sign Al Jefferson, the Pacers remain under the cap, so they should be able to finalize the signing of Brooks using cap room, rather than any sort of exception.