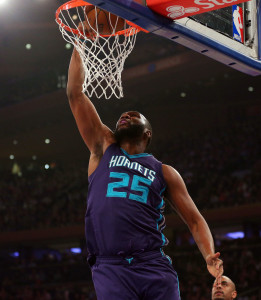 JULY 9th, 10:08am: The signing is official, the Pacers announced.

JULY 1st, 12:10pm: The Pacers and Jefferson are in agreement, according to Stein, who says the three-year deal won’t feature any options (Twitter links)

11:33am: The Pacers and unrestricted free agent Al Jefferson are nearing an agreement on a contract, Adrian Wojnarowski of The Vertical reports (Twitter link). The proposed deal would be for three years and $30MM, Marc Stein of ESPN.com tweets.

If Indiana does add Jefferson it will be the latest high-profile move the team has made this offseason, previously acquiring point guard Jeff Teague from the Hawks and combo forward Thaddeus Young from the Nets. It would appear that team executive Larry Bird is determined to remake his roster for new head coach Nate McMillan. Jefferson will add some needed toughness in the paint as well as solid veteran leadership to Indiana’s locker room.