JULY 21st: The deal is official, the team announced via press release. 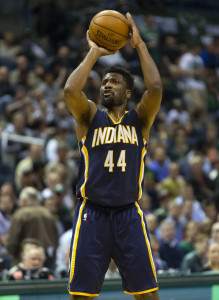 GM Dell Demps was very high on the combo forward and had been targeting him since the beginning of free agency, Kushner adds. Sources tell Kushner that the team feels Hill is a high-IQ, team player and a good passer, comparing the forward to DeMarre Carroll (Twitter link). New Orleans wants Hill to be the team’s new “two-way” small forward, Stein tweets.

Hill was set to make roughly $2.3MM next season for the Pacers, but Indiana decided not to exercise its team option for the final year of his rookie deal. Hill had an up-and-down career for the Pacers before breaking out in the playoffs this past year.