JUNE 22, 8:58pm: The trade is now official, with commissioner Adam Silver announcing it during the TV broadcast of tonight’s draft. The Wolves used the No. 16 pick on Creighton’s Justin Patton to complete the deal.

6:44pm: The Timberwolves are set to acquire Bulls forward Jimmy Butler, with K.C. Johnson of The Chicago Tribune tweeting that the two sides have reached an agreement in principle on a Butler deal. 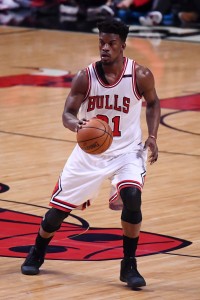 According to Johnson (via Twitter), the Bulls will receive Zach LaVine, Kris Dunn, and the No. 7 overall pick. The Wolves will also receive the No. 16 selection from Chicago. Marc Stein of ESPN.com (via Twitter) first reported that a deal was close.

The deal reunites Butler with Tom Thibodeau, his former coach in Chicago, who now serves as coach and president of basketball operations in Minnesota. Butler has been an All-Star the past three seasons and averaged 23.9 points and 6.2 rebounds with the Bulls this year.

The Timberwolves are taking on much more salary in the deal than they are unloading. They had about $24MM in available cap room after waiving Nikola Pekovic on Tuesday and receiving cap relief for his remaining salary.

In return, the Bulls will receive LaVine, a promising 22-year-old combo guard whose season ended in early February when he suffered a torn ACL in his left knee; and Dunn, the fifth overall pick last year. Both players are on rookie contracts and were discussed when the two teams talked about a Butler trade a year ago. Chicago will also land Lauri Markkanen, the seventh overall pick.