7:51pm: The three-way trade is now official, according to press releases issued by the Knicks and Nuggets. 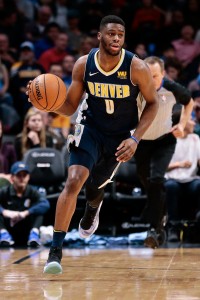 1:09pm: Denver, New York and Dallas have reached agreement on a three-team trade that will send Emmanuel Mudiay to the Knicks, Devin Harris to the Nuggets and Doug McDermott to the Mavericks, reports Adrian Wojnarowski of ESPN.

The Knicks are adding to their options at point guard by taking on Mudiay, who was the seventh player selected in the 2015 draft. He was given the starting spot as a rookie, but has drifted into a reserve role as shooting problems have slowed his progress. He joins 2017 first-rounder Frank Ntilikina in New York’s backcourt, along with veteran Jarrett Jack and Trey Burke. Mudiay is owed nearly $4.3MM for next season and is eligible for a rookie contract extension in the summer of 2019.

Harris, who will turn 35 later this month, brings a veteran presence to Denver’s backcourt for the rest of the season. He is averaging 8.5 points in 44 games and has an expiring contract worth a little more than $4.4MM.

McDermott, part of the package the Knicks received in exchange for Carmelo Anthony, averaged 7.2 points and shot .387 from 3-point range in 55 games for New York. This is the third trade in the past 12 months for McDermott, who will be a restricted free agent this summer.