The Hornets have relieved head coach Steve Clifford of his duties, the team announced today (via Twitter). Clifford had been scheduled to meet this morning with new Hornets president and GM Mitch Kupchak, and he and his staff had been expecting this move, per Chris Mannix of Yahoo Sports (Twitter link). 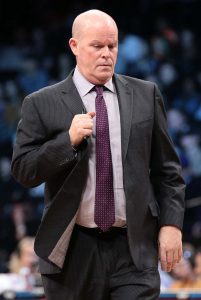 Clifford, who was hired by Charlotte in 2013, had been the NBA’s seventh-longest-tenured head coach. He led the franchise to a 196-214 record (.478) during his five years on the sidelines. The Hornets earned playoff berths twice during those five years, but were eliminated in the first round in both 2014 and 2016.

Since the regular season ended on Wednesday, three head coaches of Eastern lottery teams have been dismissed, with Clifford’s firing coming on the heels of the Knicks and Magic parting ways with Jeff Hornacek and Frank Vogel, respectively.

In each instance, a new management team has been installed within the last year, and those front offices will now have the opportunity to hand-pick their own head coaches. In Charlotte, Kupchak was formally hired just days ago, so finding a new coach will be his first major task with the franchise. It’s not yet clear what the list of candidates may look like for the Hornets.

Clifford stepped away from the Hornets for a little over a month earlier this season for health reasons. However, according to ESPN’s Adrian Wojnarowski, Clifford has “fully recovered” from the headaches and insomnia that forced him to take a leave of absence.

Despite his rough year in Charlotte, Clifford remains well regarded in coaching circles, and it may not take him much time to find a new job elsewhere. As Mannix notes, there’s a chance that both Clifford and lead assistant Stephen Silas will be in the mix for head coaching openings this spring.

In addition to the Hornets, Knicks, and Magic, the Suns, Bucks, and Grizzlies are also expected to conduct head coaching searches this spring — those three teams currently have interim coaches in place.