JUNE 13: Nurse and the Raptors have agreed to a three-year, $10MM contract, reports Wojnarowski (via Twitter). That’s a much more team-friendly deal than the one Casey reportedly signed with the Pistons (five years, $35MM+), which makes sense, given Nurse’s lack of NBA head coaching experience. 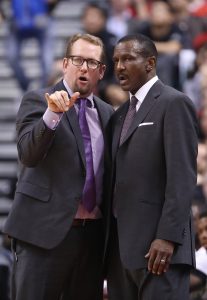 The Raptors have issued a press release indicating they’ll introduce Nurse as their new head coach in a press conference on Thursday afternoon.

JUNE 12: The Raptors are hiring assistant Nick Nurse as their new head coach, according to ESPN’s Adrian Wojnarowski, who adds that the two sides are finalizing the details of a contract. The report comes on the heels of Marc Stein of The New York Times (Twitter link) writing of a “growing expectation in NBA coaching circles” that Nurse would be Toronto’s pick.

A report earlier this week indicated that Toronto’s decision would likely come down to Nurse and Spurs assistant Ettore Messina, who was meeting with the team for a second time about its head coaching vacancy. Nurse, a top assistant under former head coach Dwane Casey, had been considered a frontrunner throughout the process.

A longtime coach in various leagues, including the British Basketball League, Nurse was a two-time champion in the BBL and won two more titles in the G League in 2011 and 2013. Following that second G League championship, he joined Casey’s staff in Toronto, where he has spent the last five seasons. Nurse – who was voted a top up-and-coming coaching candidate by NBA executives earlier this year – received much of the credit for revamping the Raptors’ offensive system to great effect in 2017/18.

Despite the improvements to their offense and a franchise record for regular season wins, the Raptors were once again bounced unceremoniously from the playoffs by LeBron James and the Cavaliers this spring, which led to Casey’s firing. Considering the Raptors have won between 48 and 59 games in each of the last five seasons, the bar will be set high for Nurse. Along with president of basketball operations Masai Ujiri, Nurse will have to find a way to keep up the club’s regular season success while turning the squad into a more formidable postseason opponent.

In addition to Nurse and Messina, the Raptors interviewed Rex Kalamian, Ime Udoka, Sarunas Jasikevicius, Mike Budenholzer, and Jerry Stackhouse during their head coaching search. Budenholzer – who was considered an early favorite to replace Casey – and Stackhouse took other jobs, while the other candidates weren’t considered finalists.

It will be interesting to see if Kalamian and other Toronto assistants remains on the Raptors’ staff with Nurse, or if they make the move to Detroit to join Casey. As we noted earlier today, Casey will have the freedom to pick his own staff with the Pistons.

The Raptors were the last NBA team without a head coach in place, so once they make things official with Nurse, all 30 jobs around the league will be filled.