JULY 11: The Clippers have officially signed Mbah a Moute, according to the NBA’s transactions log. 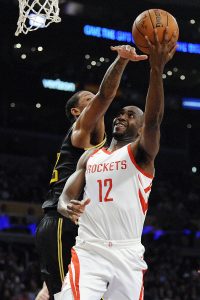 JULY 9: Rockets free agent forward Luc Mbah a Moute has agreed to a one-year contract with the Clippers, Adrian Wojnarowski of ESPN tweets. The contract will be worth $4.3MM, Wojnarowski adds in another tweet.

Mbah a Moute had expressed dissatisfaction in his negotiations with Houston this month with the Rockets apparently offering just the veteran’s minimum. The Spurs, Lakers, Wizards, and Sixers had also reportedly expressed some level of interest in Mbah a Moute.

The Clippers essentially split their mid-level exception to acquire both Mbah a Moute and another forward, Mike Scott, according to ESPN’s Zach Lowe.

The loss of Mbah a Moute appears to increase the possibility that Carmelo Anthony will wind up in a Houston uniform. The Rockets have now lost two key defensive wings in free agency with Trevor Ariza joining the Suns.

Familiarity played a role in Mbah a Moute’s decision, as he played two seasons for Doc Rivers and the Clippers before joining the Rockets prior to last season. He averaged 7.5 PPG in 25.6 MPG in his limited offensive role while making an above-average 36.4% of his long-range attempts.

In terms of the Clippers, the addition of Mbah a Moute gives them 14 guaranteed contracts and three others – Milos Teodosic, Patrick Beverley and CJ Williams – that are partially guaranteed or non-guaranteed, Bobby Marks of ESPN notes. Los Angeles now has $118MM in salary, $5.7MM below the luxury-tax threshold.