JULY 6: The long-awaited deal between the Nets and Hornets has finally been completed, the Hornets announced today in a press release. Howard will now work on finalizing his buyout with the Nets, and has already lined up a deal with the Wizards. Meanwhile, Hamidou Diallo – the 45th overall pick in the draft – will be flipped from Charlotte to Oklahoma City. 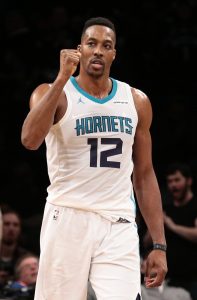 JUNE 20: The Nets and Hornets are finalizing a deal that would send Timofey Mozgov to Charlotte and Dwight Howard to Brooklyn, league sources tell ESPN’s Adrian Wojnarowski (Twitter link). The Hornets will also acquire a pair of second-round picks and cash considerations in the deal, tweets Shams Charania of Yahoo Sports.

In his full report on the trade, Wojnarowski provides more details on the picks involved in the deal, reporting that Charlotte will receive the No. 45 pick in this year’s draft, along with Brooklyn’s 2021 second-rounder.

The swap will allow the Nets to acquire a more productive center in the short term while also further clearing their cap sheet for the 2019 offseason. Howard’s contract is set to expire at that point, as are DeMarre Carroll‘s and Jeremy Lin‘s. By clearing Mozgov’s 2019/20 salary from their books, the Nets should have the flexibility to create two maximum-salary slots that summer.

As for the Hornets, they’ll save some money in the short term, since Mozgov’s $16MM salary for 2018/19 is more modest than Howard’s $23.82MM cap charge. While Charlotte is taking on the longer-term contract in the deal, the club will have far more breathing room below the projected luxury-tax line in ’18/19, and will pick up a few extra assets for its willingness to take on Mozgov.

The inclusion of Mozgov in the trade, one year after he was sent from the Lakers to the Nets, is interesting for a couple reasons. For one, the veteran had recently expressed dissatisfaction with his role – or lack thereof – in Brooklyn, suggesting that his relationship with head coach Kenny Atkinson had reached a “breaking point,” as Brian Lewis of The New York Post wrote this week. By moving him, the Nets should avoid a potential locker-room issue.

Additionally, it’s worth noting that the general manager who is taking on Mozgov now is the one who initially signed him to his current four-year contract back in 2016. This is Mitch Kupchak‘s first roster move since being named the Hornets’ president of basketball operations and GM in the spring. His 2017 ouster in Los Angeles was largely attributed to the Lakers’ signings of Mozgov and Luol Deng in the summer of ’16, so this is a somewhat ominous start to his time in Charlotte.

Howard, meanwhile, will finally land in Brooklyn, which was his preferred landing spot several years ago when the former first overall pick was still a member of the Magic. Howard never made it to the Nets at that point in his career, but he’ll do so now, joining his fourth team in the last four years.

If the two teams intend to finalize the trade before the new league year begins on July 1, at least one more player would have to be included, since Howard’s cap hit for 2017/18 ($23.5MM) is substantially larger than Mozgov’s ($15.28MM), and Brooklyn doesn’t have the cap space to accommodate the difference. However, the Nets could create the necessary cap room after July 1, so there’s a good chance it won’t be finalized until after the July moratorium ends, as ESPN’s Bobby Marks notes (via Twitter).

Assuming the Nets and Hornets wait until the new league year to make the trade official, Brooklyn will become a cap-room team for 2018/19, losing access to its mid-level, bi-annual, and trade exceptions. Meanwhile, Charlotte would create a trade exception worth $7,819,725.