AUGUST 9: The Pelicans have officially signed Okafor, according to the NBA’s official transactions log. 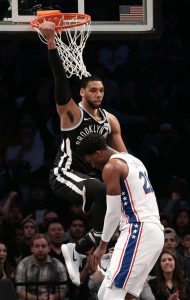 AUGUST 8: The Pelicans have agreed to sign free agent center Jahlil Okafor, according to ESPN’s Adrian Wojnarowski (Twitter links). A source tells Wojnarowski that Okafor will sign a two-year contract with a partial guarantee in the first year and a team option for year two.

Scott Kushner of The Advocate first reported on Tuesday that the Pelicans and Okafor were engaged in discussions about a possible deal. As we noted at the time, the 22-year-old could be a good fit on a Pelicans roster that is short on traditional centers. Anthony Davis, Nikola Mirotic, and Julius Randle are expected to see the majority of the frontcourt minutes for the club, but none of those players is a natural five.

While Emeka Okafor, Alexis Ajinca, and Cheick Diallo are also options at center for the Pelicans, Okafor’s salary is still non-guaranteed, Ajinca missed the entire 2017/18 season with a knee injury, and Diallo has played primarily at the four since arriving in New Orleans.

The Pelicans currently have 12 players on fully guaranteed salaries for 2018/19, with Emeka Okafor, DeAndre Liggins, Troy Williams, and now Jahlil Okafor among the players with non-guaranteed deals or partial guarantees. That should open the door for the former Sixer to potentially earn a spot on New Orleans’ 15-man regular season roster.

Okafor, drafted by the 76ers with the third overall pick in 2015, averaged 17.5 PPG and 7.0 RPG during his rookie year, but has seen his playing time and production decline since then. After being traded to Brooklyn this past season, he posted 6.4 PPG and 2.9 RPG in 26 contests (12.6 MPG) with the Nets.

Because Okafor isn’t a strong rim protector or outside shooter, he has had trouble carving out a consistent role over the course of his NBA career. However, there shouldn’t be much pressure on him to make an impact in New Orleans — the team has already used its mid-level exception on Randle and its bi-annual exception on Elfrid Payton, meaning Okafor’s new partially guaranteed contract will only be worth the minimum.