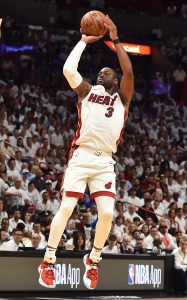 A pair of NBA veterans will make one last All-Star appearance before retirement, as the league announced today that Dirk Nowitzki and Dwyane Wade will be “special team roster additions” for the February 17 game.

“Dirk Nowitzki and Dwyane Wade embody the best of the NBA: remarkable skill, drive and professionalism as well as a deep devotion to strengthening their communities and growing the game around the world,” said NBA commisioner Adam Silver. “As a global celebration of basketball, our All-Star Game is an ideal setting to salute these first-class NBA champions and Finals MVPs.”

Nowitzki and Wade won’t be part of the regular draft when LeBron James and Giannis Antetokounmpo choose up sides on February 7. They will be selected in a third round that allows each team to add a 13th player. The remaining eight starters as chosen by the fans will be taken in the first round, with the reserves going in the second round.

This will be the 14th All-Star appearance for Nowitzki, who is in his 21st NBA season, all with the Mavericks. He is the seventh-leading scorer in league history with 31,275 points, has made 12 All-NBA teams and has won both an MVP and Finals MVP award. He hasn’t announced his retirement plans, but there is speculation that this will be his final season.

Wade, who is conducting his “Last Dance” tour around the league, will be headed to the game for the 13th time. He was named All-Star MVP in 2010 and put together a triple-double in 2012. He has won three NBA titles and an Olympic gold medal and was named MVP of the 2006 Finals.

Wade was an eight-time selection to the All-NBA team and made three appearances on the All-Defensive Team. He is the Heat’s career leader in points, assists, steals, field goals made, free throws made and games played.