10:15pm: The Blazers have officially signed Kanter, the club confirmed in a press release. 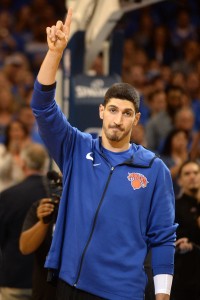 3:50pm: After being released by the Knicks last week, Enes Kanter has lined up a new NBA home, reports ESPN’s Adrian Wojnarowski (via Twitter). According to Wojnarowski, Kanter and the Trail Blazers have reached an agreement on a deal.

Kanter confirmed the news himself, tweeting that he’s signing with Portland for the rest of the season. Wojnarowski adds (via Twitter) that the Trail Blazers beat out multiple suitors, including the Lakers, for the big man’s services.

Things have gone full circle now between Kanter and the Blazers, who originally signed him to a four-year, $70MM offer sheet during 2015’s free agent period. The Thunder matched that offer and retained Kanter, then later traded him to the Knicks. The veteran center was in the final year of that four-year contract this season before New York waived him, allowing him to return to the free agent market.

The Blazers roster that Kanter is joining now looks much different than it did in 2015, and the role he’ll play probably won’t be the same as the one the team envisioned four years ago. However, he’s expected to see a “good share of minutes” in Portland, according to Wojnarowski. The 26-year-old figures to slot in as Jusuf Nurkic‘s backup at the five, perhaps cutting into Meyers Leonard‘s and/or Zach Collins‘ playing time.

While he was ultimately removed the Knicks’ rotation in recent weeks as the team prioritized developing its youth, Kanter was as productive as ever in his 44 games this season, posting a double-double (14.0 PPG and 10.5 RPG) in just 25.6 minutes per contest.

The Blazers won’t have to make a corresponding roster move to officially sign Kanter, since they had an open roster spot.