The Bird exception, named after Larry Bird, is a rule included in the NBA’s Collective Bargaining Agreement that allows teams to go over the salary cap to re-sign their own players, as most NBA fans know. A player who qualifies for the Bird exception, formally referred to as a Qualifying Veteran Free Agent, is said to have “Bird rights.”

The most basic way for a player to earn Bird rights is to play for the same team for at least three seasons, either on a multiyear deal or separate one-year contracts. Still, there are other criteria. A player retains his Bird rights in the following scenarios:

A player sees the clock on his Bird rights reset to zero in the following scenarios: 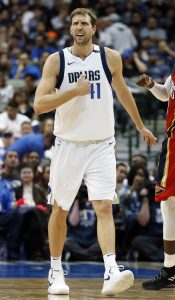 If a player who would have been in line for Bird rights at the end of the season is waived and claimed off waivers, he would retain only Early Bird rights. Meanwhile, a player with Bird rights who re-signs with his previous team on a one-year contract (or a one-year deal with a second-year option) would lose his Bird rights if he’s traded. As such, he receives the ability to veto trades so he can avoid that scenario.

When a player earns Bird rights, he’s eligible to re-sign with his team on a maximum-salary contract for up to five years with 8% annual raises when he becomes a free agent, regardless of how much cap room the team has. The maximum salary will vary for each player depending on how long he has been in the league, but regardless of the amount, a team can exceed the salary cap to complete the deal.

Instead, the Mavericks may use Porzingis’ Bird rights and his cap hold strategically, perhaps using their cap space on other free agents and/or trades while Porzingis’ $17MM cap hold remains on the books. The Mavs could then circle back and use Bird rights to sign KP to a contract with a starting salary higher than $17MM.

Ultimately, the Bird exception was designed to allow teams to keep their best players. The CBA ensures that teams are always able to re-sign them to contracts up to the maximum salary, assuming the player is interested in returning and his team is willing to go over the cap.