The Cavaliers and head coach Larry Drew have mutually agreed to part ways, sources tell Shams Charania of The Athletic (Twitter link). The team has confirmed the news in a press release. 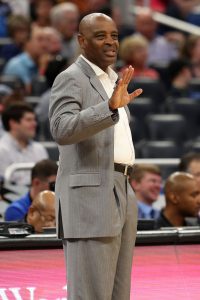 Drew, who took over for Tyronn Lue on Cleveland’s sidelines very early in the 2018/19 season, wasn’t dealt a particularly strong hand this year. Following LeBron James‘ offseason departure, remaining star Kevin Love missed most of the season due to health issues, J.R. Smith was exiled from the club, and team management traded veterans like Kyle Korver, George Hill, Rodney Hood, and Alec Burks for future assets over the course of the season.

In total, Drew led the Cavs to a 19-57 record following the club’s 0-6 start under Lue. It was Drew’s stint third stint as an NBA head coach — he previously served as the Hawks’ coach for three seasons and spent a year on the sidelines for the Bucks.

While Drew didn’t do a bad job coaxing a strong effort out of his remaining veterans and developing rookie guard Collin Sexton, he never seemed enthusiastic about the idea of remaining in the Cavs’ head coaching role for the long term. He told The Athletic back in January, “I don’t know if I ever want to be a head coach again after this year.”

A source tells Chris Fedor of Cleveland.com (Twitter link) that the Cavs offered Drew the opportunity to be part of their upcoming coaching search as one of the candidates they’d consider, but he “respectfully declined.”

Nuggets assistant Jordi Fernandez has also been identified as a potential target for Cleveland. Wojnarowski adds (via Twitter) that the team figures to examine the college ranks as well, with a focus on player development.

The Cavs are the third team to make a coaching change today, joining the Kings (Dave Joerger) and the Grizzlies (J.B. Bickerstaff).