MAY 24: The Trail Blazers have officially announced Stotts’ new extension, confirming that it will add two years to the head coach’s contract, running through the 2021/22 season.

MAY 21: Less than 24 hours after they were eliminated from the postseason, the Trail Blazers have agreed to terms on a multiyear contract extension for head coach Terry Stotts, tweets Casey Holdahl of Blazers.com. Head of basketball operations Neil Olshey said that the two sides finalized an agreement “20 minutes ago,” Holdahl adds (via Twitter). 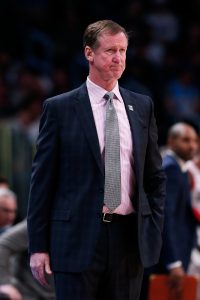 Stotts, who previously coached the Hawks and Bucks, took over the Blazers’ head coaching job in 2012, which makes him the fourth longest-tenured coach in the NBA. After finishing 33-49 in his first season on Portland’s bench, Stotts has led the club to six consecutive playoff berths, for an overall regular season record of 325-249 (.566).

The 2018/19 season represented the first time that Stotts had guided the Blazers past the second round of the postseason. In their five previous playoff trips, the team was eliminated in the first round three times and advanced to the Western Conference Semifinals twice.

Stotts’ contract with the Blazers had been set to expire after the 2019/20 season, so it comes as no surprise that the club would quickly extend his deal rather than asking him to enter next year as a lame duck.

As we detailed earlier today, Stotts hadn’t been thrilled by the fact that Portland chose not to extend him a year ago after his Blazers claimed the No. 3 seed in the Western Conference, then were swept by the Pelicans in the first round.