Raptors star Kawhi Leonard is declining his $21.3MM player option for the 2019/20 season and will test unrestricted free agency this summer, according to Chris Haynes of Yahoo Sports. 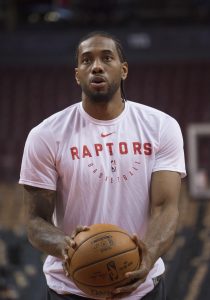 Leonard will seriously consider re-signing with the Raptors, Haynes adds, with several rival executives believing Toronto is the front-runner for his services on the open market.

Leonard is coming off an historic playoff stretch with the team that saw him average 30.5 points, 9.1 rebounds and 1.7 steals per contest, with the 27-year-old winning his second NBA championship and Finals MVP. He formed a strong bond with his teammates, coaches and fans this season, a positive sign for a franchise coming off its first NBA title.

Toronto is the only team that can offer Leonard a five-year, $190MM maximum-salary contract. The Clippers are expected to be a major suitor for Leonard, as Haynes notes, with the appeal of returning to southern California likely to be a strong factor in Leonard’s decision. A handful of other teams may also secure a meeting with him.

Free agency opens on June 30 at 6:00pm eastern time this year, with the moratorium period lasting until July 6 at noon. After that, teams can officially sign their respective players to contracts.