JULY 26, 8:09am: The Bucks have officially signed Bender, per NBA.com’s transactions log. 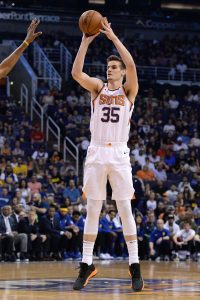 JULY 25, 12:20pm: The first year of Bender’s deal with the Bucks is partially guaranteed, while the second is non-guaranteed, reports Matt Velazquez of The Milwaukee Journal Sentinel (Twitter links).

JULY 25, 10:49am: Free agent power forward Dragan Bender won’t be returning overseas after all, as ESPN’s Adrian Wojnarowski reports (via Twitter) that the former lottery pick has reached an agreement on a two-year deal with the Bucks.

Guarantee details aren’t yet known, but Milwaukee can’t offer more than the veteran’s minimum, which would result in salaries worth approximately $1.68MM in 2019/20 and $1.82MM in 2020/21 for Bender.

A report last week indicated that Bender was close to signing with defending EuroLeague champions CSKA Moscow. However, the verbal agreement Bender had with the Russian club was said to be contingent on him not receiving any last-minute NBA offers. Now that the Bucks have swooped in at the 11th hour, the young big man will remain stateside.

Before making their deal with Bender official, the Bucks are already carrying 14 players with fully guaranteed salaries for 2019/20. If Bender gets a guaranteed salary too, it would make him a strong favorite to fill the team’s 15th and final regular season roster spot.