Prior to getting the nod on Monday night, the last time Isaiah Thomas started a game was on March 14, 2018 (vs. the Warriors as a member of the Lakers). Thomas, who signed a one-year deal with the Wizards this offseason, told Hoops Rumors and other media members in attendance at the Capital One Arena that he selected Washington because of the Wizards’ willingness to give him a chance and the transparency in their planning.

“I chose the Wizards because they looked me in the eye and told me they would give me an opportunity and I can’t thank them enough,” Thomas said after Monday’s win over the Pistons. 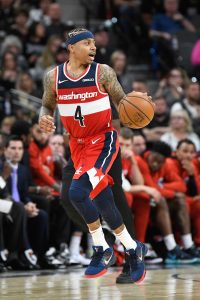 Thomas has battled through a hip injury that seemingly derailed his career. Entering this year, he injured his thumb, which delayed his debut with the club. The point guard admits that mentally, it wasn’t easy working his way back to this point.

“It’s rehab, and for me to go through that for two years was tough, I’m not going to lie to you. It did break me at times, but it can’t storm forever,” Thomas told Hoops Rumors and other media members on Monday. “The sun eventually has to come out at some point.

“I had real faith in God, and I know that he can put you things that you can always handle. I have a great circle around me, great friends, great family. They’ve helped me through these past two years, so it’s just taking advantage of the situation. I chose the Wizards because they looked me in the eye and told me they would give me an opportunity and I can’t thank them enough.”

The Wizards’ rotation has been fluid, with several members of the team returning from injury and coach Scott Brooks tinkering with players’ minutes. While IT in the starting lineup appears here to stay, more changes could be on the horizon. Thomas appreciates playing with the starters but he’s open to any role on the club going forward.

“I know who I am, I’m one of the best basketball players in the world. It doesn’t affect me,” Thomas said. “I approach the game the same way. But, I mean, I am happy to be starting.”

3 thoughts on “Isaiah Thomas Chose Wizards Because Of Opportunity, Sincerity”