DECEMBER 24: The trade has been officially completed, according to NBA.com’s transactions log. Clarkson and Exum should be ready to suit up for their new teams when they resume play on Thursday and Friday, respectively. 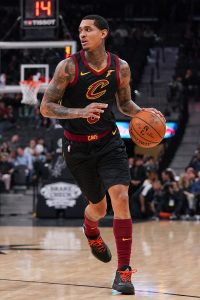 The second-rounders are picks that were owed to Utah, San Antonio’s in 2022 and Golden State’s in 2023, Brian Windhorst of ESPN tweets.

Assuming the deal becomes official, it will be the first NBA trade since mid-July. The Thunder and Rockets finalized their Chris Paul/Russell Westbrook swap on July 16.

Clarkson is essentially a rental for the disappointing Jazz, who are looking to boost their bench scoring. Clarkson has an expiring $13.4MM contract. The Cavaliers will create a $3.83MM trade exception, according to ESPN’s Bobby Marks. Cleveland also drops $5.1MM under the luxury tax line, Marks adds (Twitter link).

Exum, a former lottery pick whose career has been sidetracked by injuries, still has two years and $19.2MM left on his contract.

The Cavaliers are planning to deal veterans on the roster in order to obtain more draft picks and young assets, according to Wojnarowski. That could mean players such as Kevin Love and Tristan Thompson could also be on the move before February’s trade deadline.

Clarkson is off to a strong start, averaging 14.6 PPG. He erupted for a season-high 33 points against Memphis on Friday.

This is the third time in three years the teams have been involved in swap, Wojnarowski notes. The Jazz acquired Kyle Korver for Alec Burks and two-second round picks in November of 2018. They also were involved in a three-way deal with the Kings at the February 2018 trade deadline that included Cleveland trading Jae Crowder for Utah’s Rodney Hood.