The Nets and head coach Kenny Atkinson have mutually agreed to part ways, the team announced today in a press release. Assistant coach Jacque Vaughn will take over as the club’s interim head coach. 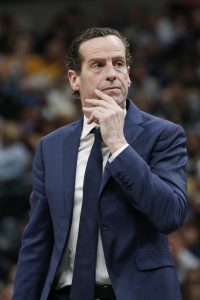 “After discussions with Kenny about the progress of the season, we mutually agreed that a coaching change would be in the best interest of the team,” Nets general manager Sean Marks said in a statement. “This was an extremely difficult decision, however the organization believes it is one that is necessary at this time. Kenny was instrumental in developing our players and building the identity and culture we have become known for over these past four seasons. The foundation he helped put into place here is one that we will continue to build on in the coming seasons.”

Although the Nets have fallen a little short of expectations this season, that can be attributed in large part to the injuries to stars Kevin Durant and Kyrie Irving. Durant has missed the entire 2019/20 campaign while recovering from an Achilles tear, while shoulder issues limited Irving to just 20 games. Brooklyn is still in position to make the playoffs, albeit with a modest 28-34 record.

Given the circumstances surrounding the team’s performance this season, it’s surprising that the Nets would feel motivated to make a change. However, Adrian Wojnarowski of ESPN says (via Twitter) that Atkinson and Marks had multiple conversations and sensed that the relationship had run its course and that an eventual change was inevitable. The two sides decided not to wait on that change, despite the fact that they maintain a close relationship, Woj adds.

As Wojnarowski notes in a separate tweet, Atkinson has shown that he’s comfortable and effective leading a rebuilding team, so he should be in high demand going forward as other lottery-bound clubs around the NBA seek new coaches of their own. One of those teams is also in New York, though it remains to be seen if Atkinson will emerge as a target for the Knicks this spring.

As for the Nets, while Vaughn is taking the head coaching reins in the interim, the team will presumably conduct a more expansive coaching search at season’s end. With Durant and Irving expected to be ready to go in the fall, Brooklyn figures to target a coach who can potentially lead a veteran squad to title contention, rather than one overseeing a rebuild.