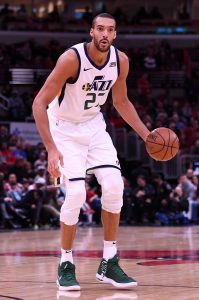 The NBA has confirmed in a press release that a Jazz player tested positive for COVID-19, though the league didn’t specifically name Gobert as that player. The test result was reported just before tip-off of tonight’s game between Utah and Oklahoma City, which was postponed.

The affected player – presumed to be Gobert – wasn’t in the arena at that time, according to the league’s statement. Gobert was never at the Chesapeake Energy Arena tonight, ESPN’s Royce Young confirms (Twitter link).

As a result of the coronavirus crisis, the NBA will suspend the season indefinitely following the conclusion of tonight’s games.

According to reports from Charania and Young (Twitter links), even though Gobert was initially ruled out for tonight’s game with an illness, he felt strong enough to play. The league wanted confirmation that he didn’t have coronavirus before he could be cleared to play, so he was tested before the game.

Once it was determined that Gobert had tested positive, the game was immediately postponed and players and staff returned to their respective locker rooms. According to ESPN’s Adrian Wojnarowski (via Twitter), Jazz and Thunder players are currently being quarantined in the arena.

While it’s not clear exactly when Gobert contracted the virus, he’ll face criticism for making light of the situation on Monday by going out of his way to touch every microphone and recorder in front of him following his shootaround availability (Twitter link via Eric Walden of The Salt Lake Tribune).

Depending on how long Gobert – or others – have had the virus, the ripple effect across the NBA could be massive. As Sam Amick of The Athletic notes (via Twitter), Utah has played the Raptors, Pistons, Celtics, and Knicks in the past eight days, so players from those teams seem like good bets to be tested as soon as possible.