JULY 1, 12:53pm: Burke has officially signed a contract, according to his Twitter feed.

JUNE 25, 12:32pm: Mavericks center Willie Cauley-Stein has opted to sit out of the NBA’s restart this summer, according to Shams Charania of The Athletic, who notes (via Twitter) that Cauley-Stein and his partner are expecting a newborn child in July.

Free agent guard Trey Burke has agreed to a rest-of-season deal with Dallas and will take Cauley-Stein’s place on the summer roster, per Charania (via Twitter). Tim MacMahon of ESPN (Twitter link) first reported that the Mavs had interest in signing Burke.

Burke, 27, was waived by the Sixers at this year’s trade deadline when Philadelphia needed a roster spot to accommodate incoming additions Glenn Robinson III and Alec Burks. Up until that point, the former lottery pick had been a solid offensive option off the bench for the 76ers, averaging 5.9 PPG and 2.1 APG on .465/.421/.722 shooting in 25 games (13.2 MPG). 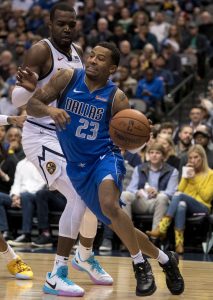 Burke has some history with the Mavericks, having spent a portion of the 2018/19 season in Dallas after being traded by the Knicks. He recorded 9.7 PPG and 2.6 APG in 25 games (17.4 MPG) for the Mavs last season, and will help replace injured guard Jalen Brunson in the team’s backcourt this season. He’ll get a minimum-salary, rest-of-season deal and will become an unrestricted free agent at season’s end.

The Mavericks have a full 15-man roster and weren’t eligible to add a substitute player to replace any of their injured players (Dwight Powell, Courtney Lee, and Brunson). However, they don’t need an open roster spot to sign a replacement for a player who is voluntarily opting out, such as Cauley-Stein.

Cauley-Stein, who holds a $2.29MM player option for 2020/21, won’t be fined or suspended for deciding not to participate in the summer restart. However, he’ll forfeit some ’19/20 pay for sitting out, giving up 1/92.6th of his salary for each Mavs game he misses, up to a maximum of 14 contests. Cauley-Stein is the fourth player known to be opting out of the NBA’s return, joining Avery Bradley, Trevor Ariza, and Davis Bertans.

If the Mavericks want to make another addition to their roster to help fill the holes created by injuries, waiving Lee – who is on an expiring contract – would be an option. However, Brad Townsend of The Dallas Morning News tweeted earlier this week that the Mavs aren’t eager to release Lee, since they value his locker room impact and would like to have him in Orlando this summer.

20 thoughts on “Cauley-Stein Opting Out Of Restart; Mavs Sign Burke”