The NBA announced today in a press release that it has concluded its investigation into Rockets forward Danuel House following an apparent violation of campus health and safety protocols. According to the league, the investigation found that House had an unauthorized guest in his hotel room “over multiple hours” earlier this week. 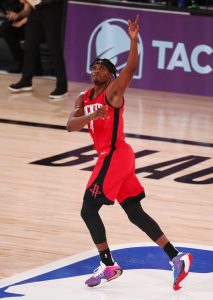 “Mr. House is leaving the NBA campus and will not participate with the Rockets team in additional games this season,” the Rockets said in their statement.

As we detailed in a pair of stories on Wednesday and Thursday, the league’s probe into the Rockets was focused on the belief that a female COVID-19 testing official entered the team hotel without authorization for several hours late on Monday night.

When asked about the incident, the staffer reportedly implicated Tyson Chandler and another Rocket, but those players were cleared and the investigation focused on House, who was held out of Games 3 and 4 of Houston’s series vs. the Lakers as he quarantined. The league was said to have circumstantial evidence implicating the forward.

“If it was a star player, there’s no way (the NBA) would handle it this way,” a person close to House with direct knowledge of the investigation told Golliver. “They want to make an example out of somebody.”

Another source told Golliver that the NBA was “prioritizing their perception of safety over everything else.”

House is a key rotation player for Houston, having averaged 11.4 PPG and 5.8 RPG on .435/.358/.769 shooting in the Rockets’ first nine playoff games (31.0 MPG). The Rockets have lost both games with House sidelined and find themselves in a 3-1 hole that may be too big to climb out of — especially without an important role player.