The Raptors have signed head coach Nick Nurse to a multiyear contract extension, the team announced today in a press release. Nurse’s three-year deal with the club had been set to expire in 2021. 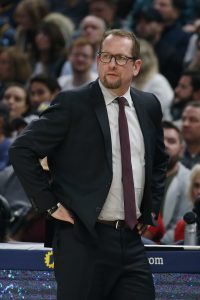 “Our confidence in Nick just continues to grow, and part of that comes from what we’ve experienced together. The past two seasons have been unlike any other in our team’s history – first, winning our championship, and then navigating a global pandemic and committing long-term to the fight against racism and for social justice,” Raptors president of basketball operations Masai Ujiri said in a statement. “Nick has proved that he can coach on the court and lead in life, and we’re looking forward to accomplishing great things in the future.”

Previously an assistant coach on the Raptors’ staff under Dwane Casey, Nurse was promoted following the 2017/18 season and has enjoyed a near-perfect two-year run in his first stint as an NBA head coach. He has an 111-43 (.721) regular season record and a 23-12 (.657) postseason mark during that stretch, winning the franchise’s first-ever title in 2019 and earning Coach of the Year honors in 2020.

While the Raptors’ playoff run this summer ended in the second round with a Game 7 loss to the Celtics, Nurse earned praise all season long for leading Toronto to a No. 2 seed in the East despite losing Finals MVP Kawhi Leonard and dealing with a bevy of injuries to his starters and rotation players.

The terms of Nurse’s new contract aren’t yet known, but a multiyear extension means the team has added at least two seasons to the one year left on his initial deal, locking him up through at least 2023.

It’s also probably safe to assume that Nurse received a raise on his new contract. When he was promoted to replace Casey in 2018, his three-year deal was said to be worth less than $10MM in total.

Nurse is one of several key figures within the organization who was in line for an extension this offseason. President of basketball operations Masai Ujiri and general manager Bobby Webster each have one year left on their respective contracts, and the club figures to pursue new deals with both executives very soon. Meanwhile, Fred VanVleet, Marc Gasol, and Serge Ibaka are all on track for unrestricted free agency, while OG Anunoby is becoming extension-eligible for the first time.