Clippers president of basketball operations Lawrence Frank has been named the NBA’s Executive of the Year for the 2019/20 season, the league announced today in a press release. 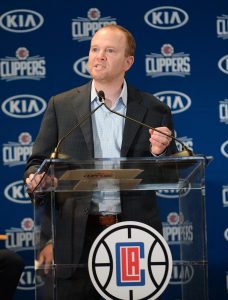 Frank received 10 of 29 first-place votes for the award, which is voted on by a panel of team front office executives from around the league. He beat out Sam Presti of the Thunder and Pat Riley of the Heat, who finished second and third, respectively.

The criteria for the Executive of the Year award aren’t clearly defined, so some top vote-getters are recognized for the splashy or savvy roster moves they made within the last year, while others receive votes for an accumulation of the moves made in recent years that helped build their current rosters.

In Frank’s case, it’s safe to say he earned Executive of the Year honors for the job he did landing Kawhi Leonard and Paul George on the same night last July, instantly turning the Clippers into title contenders. The team also re-signed Patrick Beverley, Ivica Zubac, JaMychal Green, and Rodney McGruder to new deals, and acquired Maurice Harkless and a first-round pick in a four-team deal during the free agent period last summer. Frank later flipped Harkless and a first-rounder to the Knicks for Marcus Morris.

Frank’s roster moves didn’t ultimately result in a deep playoff run for the Clippers, who were upset in the second round by the Nuggets. However, voting for the Executive of the Year award was completed prior to the NBA’s summer restart.

The full voting results for Executive of the Year can be found below. Teams’ heads of basketball operations were awarded five points for each first-place vote, three points for a second-place vote, and one point for a third-place vote.

22 thoughts on “Clippers’ Lawrence Frank Named Executive Of The Year”