The NBA’s salary cap is a “soft” cap, which is why every single club’s team salary comfortably surpassed $109,141,000 at some point during the 2019/20 season. Once a team uses up all of its cap room, it can use a series of exceptions, including the mid-level, bi-annual, and various forms of Bird rights, to exceed the cap.

Since the NBA’s Collective Bargaining Agreement doesn’t feature a “hard” cap by default, teams can construct rosters that not only exceed the cap but also blow past the luxury tax line ($132,627,000 in ’19/20). While it would be nearly impossible in practical terms, there’s technically no rule restricting a club from having a team salary worth double or triple the salary cap.

However, there are certain scenarios in which a team can be hard-capped. Those scenarios are as follows:

A team making any of those three roster moves must ensure that its team salary is below the “tax apron” when it finalizes the transaction and stays below the apron for the rest of the league year. The tax apron was set $6MM above the luxury tax line in 2017/18 (the first year of the current Collective Bargaining Agreement) and creeps up a little higher each season as long as the cap keeps increasing. 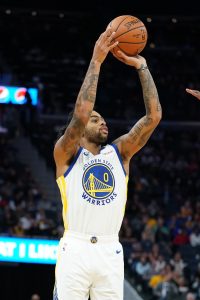 Last offseason, before the Warriors acquired D’Angelo Russell in a sign-and-trade deal, they had to dump Andre Iguodala‘s $17MM+ salary in a trade and waive Shaun Livingston‘s partially guaranteed contract to ensure their team salary was below the apron upon acquiring Russell.

Golden State then had to remain below the apron for the rest of the season, which was why the team spent much of the year carrying fewer than 15 players on standard contracts — even an extra minimum-salary player would’ve compromised the Warriors’ ability to stay below the hard cap. Golden State made some trades at the deadline that created some breathing room below the apron and allowed the club to fill its 15-man roster.

Many other teams technically faced hard caps during the 2020/21 season, but the Warriors were the team most affected by the restrictions imposed upon them. Most of the other teams with hard caps never got close to the $138,928,000 apron.

Once the 2020/21 league year officially gets underway, the Warriors will no longer be subject to the hard cap. And as long as they don’t use their bi-annual exception, acquire a player via sign-and-trade, or use more than the taxpayer portion of the mid-level, they won’t face a hard cap next season. So even though the Dubs already have a projected $142MM+ in guaranteed money on the books for ’20/21, they’ll still be able to make full use of their $17MM+ trade exception and $5.72MM taxpayer MLE if they so choose.

Finally, it’s worth noting that even though the Warriors will likely start the 2020/21 league year above the apron, that doesn’t mean they can’t become hard-capped at some point later in ’20/21. For example, if Golden State kicked off the offseason by trading Andrew Wiggins‘ $29.5MM contract without taking back any salary in return, then subsequently used its full, non-taxpayer mid-level exception, the team would once again be prohibited from surpassing the apron for the rest of the league year.

In other words, the hard cap applies from the moment a team completes one of the three transactions listed above, but isn’t applied retroactively.