NOVEMBER 28: The new contract is official, the Heat announced on Twitter. 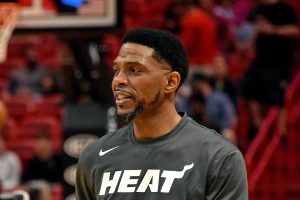 “It’s great to have UD back,” team president Pat Riley said. “His role is so critical for our team. Besides being able to still play, UD keeps everyone together in the locker room and on the road, teaching and mentoring.” (Twitter link from Anthony Chiang of The Miami Herald)

NOVEMBER 20: The Heat have agreed to a new deal with veteran big man Udonis Haslem, Tim Reynolds of the Associated Press tweets. Haslem will officially return for an 18th consecutive season with the team.

Haslem, 40, committed to re-signing with the Heat earlier this month, bypassing potential retirement. He’s won three championships during his time with Miami (2005-06, 2011-12 and 2012-13), transitioning into a veteran role with the club this the past decade.

Several Heat players have raved about Haslem’s impact in the locker room as the team’s captain, particularly during the club’s impressive postseason run in Orlando. Miami was expected to explore its options and keep Haslem around in some capacity — even if he did choose to retire. On the court, he’s only appeared in 44 regular-season games since the 2016-17 campaign.

In addition to Haslem, the Heat also managed to strike deals with free agents Goran Dragic and Meyers Leonard early in free agency. The team still has Jae Crowder, Derrick Jones Jr. and Solomon Hill on the open market, with Crowder starting in the playoffs and the latter two seeing inconsistent time.