7:55pm: The Rockets offered Harden the maximum allowable extension — a two-year, $103MM deal that would start in 2023 — but he turned it down, according to Wojnarowski. There has been contact between Houston and Brooklyn, Harden’s desired destination, but there’s been no meaningful dialogue, Wojnarowski adds. 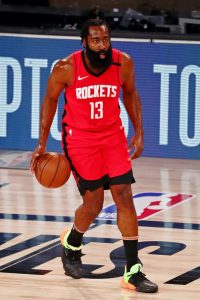 While Harden is seeking a trade, he appears “singularly focused” on Brooklyn as a landing spot, per Wojnarowski. Mark Berman of FOX 26 Houston conveys a similar sentiment, tweeting that Harden only wants to be dealt to the Nets.

With at least two years still left on Harden’s contract, the Rockets can afford to “slow-play the process,” according to Wojnarowski, who says the team’s preference is to work through the issues with its star guard. That looks like a challenge at this point, but there’s also no indication that Houston believes the Nets could deliver the massive return of assets the Rockets would be seeking for Harden, writes Woj.

1:46pm: Harden wants to be on a contender elsewhere, and the Nets and Sixers are believed to be atop his wish list, sources tell Shams Charania of The Athletic (Twitter link).

Crucially, Charania notes that the Rockets are “fully comfortable” keeping both Harden and Westbrook into the season. Both players still have two fully guaranteed years left on their contracts, with pricey player options for 2022/23.

10:38am: Superstar guard James Harden wants to move on from the Rockets, according to Brian Smith of The Houston Chronicle, who says the former MVP is pushing for a trade to Brooklyn. ESPN first reported on Sunday that Harden was intrigued by the possibility of being traded to the Nets.

The dissatisfaction of the Rockets’ two star guards has apparently escalated within the last week. On Wednesday, we heard that Harden and Russell Westbrook had expressed concerns about the team’s direction and that the idea of them requesting trades had become a “plausible eventual possibility.” Less than 24 hours later, word broke that Westbrook was hoping to be dealt. Now it sounds as if Harden feels the same way.

ESPN’s report on Sunday indicated that Houston hasn’t engaged in any trade talks with the Nets. However, the team is evaluating its options moving forward, sources tell Chris Mannix of SI.com.

The Rockets have repeatedly stated that they’re intent on contending in 2020/21 and that their plan is to “run it back” with Harden, as ESPN reported on Sunday. Rather than blowing up their roster, their goal is to reignite their core players’ belief in their championship chances, according to Jonathan Feigen of The Houston Chronicle.

As Feigen explains, Houston’s decision-makers have no interest in starting over by “tearing things down to restock shelves with draft picks and prospects.” Trading Harden would only make sense in a full-scale rebuild, and since they’ve already traded away a pair of future first-round picks and agreed to two other pick swaps, that’s not a particularly appealing option for the franchise.

The Rockets still believe they can bring in help this offseason to rebuild Harden’s confidence in their title chances, per Feigen. It’s unclear if trading Westbrook would be part of that plan — so far, new general manager Rafael Stone is in the “listening” and “exploring” stage on Westbrook, rather than the “shopping” stage, says Feigen. Houston would ideally want win-now pieces in a Westbrook deal, rather than future assets. For what it’s worth though, the Westbrook market is said to be “relatively barren,” per ESPN.

If the Rockets do become open to the idea of moving Harden, the Nets would be a fascinating trade partner. Kevin Durant and Kyrie Irving would almost certainly be off-limits, but Brooklyn could theoretically put together a package headlined by some combination of Caris LeVert, Spencer Dinwiddie, Jarrett Allen, and Taurean Prince, with draft picks and pick swaps also in play.

ESPN reported on Sunday that it’s unclear how far the Nets would be willing to go in an offer for Harden, who has had conversations with Durant about the possibility of teaming up. A move to Brooklyn would also reunite Harden with former head coach Mike D’Antoni, who is now an assistant on Steve Nash‘s staff.

Of course, even if Brooklyn is Harden’s preferred destination, he’s still under contract through at least 2022, limiting his leverage to push for a deal to a specific team. If the Rockets convey a willingness to listen to offers for the 31-year-old, more clubs would presumably get involved, including Daryl Morey‘s new team, the Sixers.