NOVEMBER 22, 8:32pm: The signing is official, according to a team press release.

NOVEMBER 21, 4:15pm: Carmelo Anthony is returning to Portland, according to Shams Charania of The Athletic, who reports (via Twitter) that the veteran forward is finalizing a new deal with the Trail Blazers. It’ll be for one year, Charania adds (via Twitter). It’ll be another minimum-salary contract, per Adrian Wojnarowski of ESPN (Twitter link). 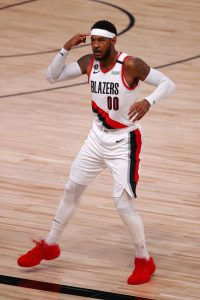 The Knicks were among the teams believed to have interest in signing Anthony in free agency this fall. However, as Charania explains (via Twitter), Anthony wanted to show loyalty to the Blazers after they gave him an opportunity to return to the NBA last season, and he knows what sort of role to expect in Portland.

It has been an active offseason so far for the Blazers, who agreed to re-sign Rodney Hood, struck a deal with free agent wing Derrick Jones, and reached trade agreements to acquire Robert Covington and Enes Kanter.

Although the Blazers barely squeaked into the Western Conference playoff picture this year, injuries played a major part in the club’s season-long struggles, and Portland looked like a different team during the restart when Jusuf Nurkic and Zach Collins returned. The Blazers will be looking to re-establish themselves as one of the West’s top teams in 2020/21.