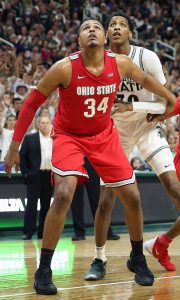 The 6’9″, 270-pound rookie big man spent three seasons with the Buckeyes. The 21-year-old was awarded Second-Team All-Big Ten honors during his junior season with the club.

Through his three seasons with Ohio State, Wesson averaged 12.9 PPG, 7.0 RPG, 1.6 APG, 0.8 BPG and 0.8 SPG and started in 92 of 96 contests. In a Warriors-friendly stat, Wesson averaged 38.5% on his 2.0 three-point attempts per game during his OSU tenure. His three-point output got more frequent and accurate each season. By his seniors year, he was converting 42.5% of his 3.4 attempts a night.

John Hollinger of The Athletic had Wesson listed as his No. 62 favorite rookie prospect in an epic pre-draft rankings piece.