Gilbert Arenas hasn’t played in the NBA since 2012, but his legacy lives on in the NBA’s Collective Bargaining Agreement. The NBA introduced the Gilbert Arenas provision in the 2005 CBA as a way to help teams retain their restricted free agents who aren’t coming off standard rookie scale contracts.

While Arenas isn’t specifically named in the CBA, the rule colloquially known as the Arenas provision stems from his own restricted free agency in 2003. At the time, the Warriors only had Early Bird rights on Arenas, who signed an offer sheet with the Wizards starting at about $8.5MM. Because Golden State didn’t have $8.5MM in cap room and could only offer Arenas a first-year salary of about $4.9MM using the Early Bird exception, the Warriors were unable to match the offer sheet and lost Arenas to Washington.

The Arenas provision limits the first-year salary that rival suitors can offer restricted free agents who have only been in the league for one or two years. The starting salary for an offer sheet can’t exceed the amount of the non-taxpayer mid-level exception, which allows the player’s original team to use either the mid-level exception or the Early Bird exception to match it. Otherwise, a team without the necessary cap space would be powerless to keep its player, like the Warriors were with Arenas.

An offer sheet from another team can still have an average annual salary that exceeds the non-taxpayer’s mid-level, however. The annual raises are limited to 5% between years one and two, and 4.5% between years three and four, but a team can include a significant raise between the second and third years of the offer.

As long as the first two years of a team’s offer sheet are for the highest salary possible, the offer is fully guaranteed, and there are no incentives included, the third-year salary of the offer sheet can be worth up to what the player’s third-year maximum salary would have been if not for the Arenas restrictions.

Based on a projected three percent salary cap increase for 2021/22, here’s the maximum offer sheet a first- or second-year RFA could receive this coming summer:

In order to make the sort of offer outlined above, a team must have enough cap room to accommodate the average annual value of the contract. So a team with $21MM in cap space could extend this offer sheet to a first- or second-year RFA. But a team with only $17MM in cap space would have to reduce the third- and fourth-year salaries in its offer sheet to get the overall average salary of the offer down to $17MM per year, despite being able to comfortably accommodate the first-year salary.

The application of the Arenas provision is infrequent, since first- and second-year players who reach free agency rarely warrant such lucrative contract offers. First-round picks sign four-year rookie deals when they enter the NBA, so the Arenas provision generally applies to second-round picks or undrafted free agents whose first NBA contracts were only for one or two years.

The Arenas provision hasn’t been used for the last several offseasons. Based on our data, it was last relevant during the 2016 offseason, when multiple teams made use of the Arenas provision as they attempted to pry restricted free agents from rival teams.

One relevant example from that summer was Tyler Johnson‘s restricted free agency with Miami. The Heat had Early Bird rights on Johnson, who had only been in the NBA for two seasons. The Nets attempted to pry him away with an aggressive offer sheet that featured salaries of $5,628,000, $5,881,260, $19,245,370, and $19,245,370. It wasn’t the maximum that Brooklyn could have offered Johnson, but the massive third-year raise was a tough pill for Miami to swallow.

Overall, the deal was worth $50MM for four years. If the Heat had declined to match it, the Nets would have flattened out those annual cap hits to $12.5MM per year, the average annual value of the deal. However, due to the Arenas provision, Miami was able to match Brooklyn’s offer sheet with the Early Bird exception, even though the Heat wouldn’t have been able to directly offer Johnson a four-year, $50MM contract using the Early Bird exception.

When a team matches an Arenas-provision offer sheet, it also has the option of flattening those cap charges. However, that option is only available if the team has the cap room necessary to accommodate the average annual value of the deal. Otherwise, the club has to keep the unbalanced cap charges on its books. When Johnson’s cap hit for the Heat jumped from $5,881,260 to an eye-popping $19,245,370 in 2018/19, it became an albatross — the team eventually sent him to Phoenix in a salary-dump deal at the 2019 deadline. 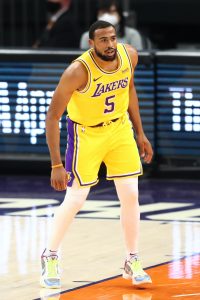 This coming offseason, there aren’t many restricted free agents who will be candidates for an Arenas-provision offer sheet. A handful of intriguing RFAs-to-be, including Duncan Robinson, Devonte’ Graham, and Gary Trent Jr., were former second-round picks or undrafted free agents, but they’ll all have three years of NBA experience when they hit the open market, so the Arenas rule won’t apply to them.

The best candidate for an Arenas-provision offer sheet may be Lakers wing Talen Horton-Tucker, who turned heads during a strong preseason in December. However, Horton-Tucker’s regular season playing time has been limited and his production has been modest. Teams may be tempted to put pressure on the Lakers by presenting THT with an aggressive offer sheet, but unless he takes another major step forward, it’d be surprising to see him get a three- or four-year free agent offer worth more than the standard non-taxpayer’s MLE.

Earlier versions of this post were published in 2012, 2015, and 2018 by Luke Adams and Chuck Myron. Photo courtesy of USA Today Sports Images.