FEBRUARY 8: The deal is official, the Knicks announced (via Twitter). 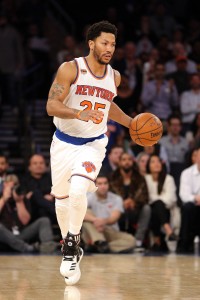 FEBRUARY 7, 2:50pm: The two teams are in agreement, per Adrian Wojnarowski of ESPN (Twitter link). The Knicks are acquiring Rose from the Pistons in exchange for Smith and Charlotte’s 2021 second-rounder.

12:11pm: Derrick Rose is set to be reunited with the Knicks and with his former Bulls and Timberwolves head coach Tom Thibodeau. New York is nearing an agreement to acquire Rose from the Pistons in exchange for Dennis Smith Jr. and future draft equity, per James Edwards III and Shams Charania of The Athletic (Twitter link).

News on the exact terms of the trade have yet to be announced. How adding Rose, a savvy veteran scoring point guard with a defined ceiling, will impact the still-developing Knicks’ rotation will be interesting to see. Fan favorite rookie Immanuel Quickley and off-guard Austin Rivers may be especially liable to feel the squeeze, but whether Thibodeau opts to start Rose in place of the more defensively-oriented Elfrid Payton is unclear.

The upstart Knicks are currently the No. 7 seed in the Eastern Conference with an 11-13 record. Offloading future draft picks for a 32-year-old veteran in a move to improve the current on-court product is a curious decision for a club that had very much been prioritizing young players this season. Even All-Star hopeful Julius Randle is only 26.

The Knicks were not the only team in the market for Rose’s services this season. The Clippers, Heat, Bucks, and Nets were apparently all interested in dealing for Rose, per Vincent Goodwill of Yahoo Sports (Twitter link).

Charania adds (via Twitter) that Rose and the Pistons mutually agreed a trade was in both sides’ best interests. The Knicks had been floated as Rose’s “preferred destination” due to his familiarity with Thibodeau and his tenure with the team in 2016/17, his last season as a full-time starter.

Smith, meanwhile, has dropped out of the Knicks’ rotation. He has appeared in just three games for the Knicks this season, but could be counted on to play a bigger role for the Pistons. With 2020 No. 7 lottery pick Killian Hayes injured for the immediate future, Delon Wright has assumed Detroit’s starting point guard duties. In the absence of Hayes, two-way rookie Saben Lee had emerged as the the third pure point guard option behind Rose.

Both Rose and Smith will be free agents at season’s end — Smith is eligible for restricted free agency, though it would require a $7MM qualifying offer from Detroit. The Pistons will have his full Bird rights, while the Knicks will have Rose’s Early Bird rights.