FEBRUARY 24: The Lakers have officially released Cook, the team announced today in a press release. He’s now on track to clear waivers on Friday, while L.A. will carry a cap hit of about $797K if he goes unclaimed. 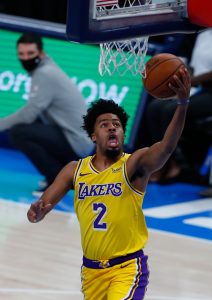 FEBRUARY 23: The Lakers are waiving veteran guard Quinn Cook, sources tell Shams Charania of The Athletic (Twitter link). The move will leave the team with a pair of open spots on its 15-man roster.

Cook, who will turn 28 in a month, averaged 11.5 minutes per game in 44 regular season games for the Lakers last season, but has played even less of a role in 2020/21, logging just 62 total minutes in 16 appearances. He has played double-digit minutes just once.

As Charania explains (via Twitter), the Lakers valued Cook, but wanted to gain some extra roster and cap flexibility for possible upcoming moves, and his non-guaranteed contract made him the obvious roster casualty. Wednesday is the deadline for teams to waive a player on a non-guaranteed deal and avoid paying them his full-season salary.

Assuming Cook is officially released on Tuesday, his cap hit will dip from $1.62MM to about $785K, creating a little extra breathing room below the hard cap for Los Angeles. The Lakers will have up to two weeks to fill at least one of their two open roster spots to get back to the league-mandated minimum of 14 players on standard contracts, but could do so temporarily with a 10-day signing.

With two open roster spots, the Lakers will have some options on the trade market, but may ultimately focus on the post-deadline buyout market, as the defending champs will be a compelling destination for the top players who reach free agency.

Cook, meanwhile, would clear waivers and become an unrestricted free agent on Thursday if he goes unclaimed. According to Charania, the former Duke standout is expected to draw some interest around the league.