MARCH 18: The Bucks have officially sent Craig to Phoenix in exchange for cash considerations, according to the club (Twitter link). 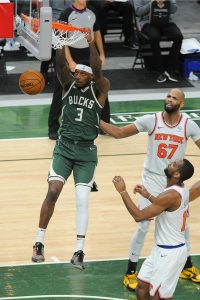 MARCH 17: The Bucks will trade reserve small forward Torrey Craig to the Suns, per Adrian Wojnarowski of ESPN (Twitter link). John Gambadoro of Arizona Sports 98.7 FM tweets that the Suns are sending out cash considerations in the deal.

Milwaukee will not be getting a player in return from Phoenix in the agreement, Woj adds (via Twitter).

After spending his first three NBA seasons with the Nuggets, Craig signed a one-year, veteran’s minimum contract with the Bucks during the 2020 offseason.

Undrafted out of the University of South Carolina Upstate in 2014, Craig began his pro career in Australia, where he played for several NBL teams from 2014-2017. He signed a two-way deal with the Nuggets in 2017, and eventually earned his way onto Denver’s regular 15-man roster.

The defensive-oriented Craig, 30, played in just 18 games with the Bucks, averaging 11.2 MPG as an occasional perimeter defender off the bench. He did improve his three-point shooting this season, connecting on 36.4% of his 1.2 long-range attempts per night. He could help spell starting Suns wings Devin Booker and Mikal Bridges in a limited role.

Phoenix’s 26-12 record currently makes the team the No. 2 seed in the Western Conference, and if Craig can have a good showing as a reserve for a potential powerhouse, he could attract some interest when he returns to free agency this summer.

The Bucks have been active today with trades, having also agreed to send backup point guard D.J. Augustin and reserve power forward D.J. Wilson to the Rockets in exchange for forwards P.J. Tucker and Rodions Kurucs. That move also involves a series of draft picks and swaps.

Thanks to these two deals, the small-market Bucks are now $3.5MM below the hard salary cap, as Bobby Marks of ESPN notes (via Twitter). Milwaukee also now has two open roster spots, which could serve the team well in future trades or in the buyout market this season.