The poison pill provision isn’t technically a term that is defined in the NBA’s Collective Bargaining Agreement. However, the concept of a “poison pill” has colloquially come to refer to a pair of NBA concepts.

The first of those concepts relates to the Gilbert Arenas Provision, which we’ve explained in a separate glossary entry. When a team uses the Arenas provision to sign a restricted free agent to an offer sheet, that team can include a massive third-year raise that is often referred to as a “poison pill.”

No current NBA contracts fit this bill, but the one Tyler Johnson signed in 2016 did — the Nets included a third-year raise in that four-year offer sheet. After the Heat matched, they had to deal with Johnson’s cap hit jumping from $5.88MM in the second year of his contract to $19.45MM in the third year.

However, the concept we’re focusing on today doesn’t involve Johnson, the Arenas provision, or RFA offer sheets. Instead, this second meaning of the “poison pill” relates to players who recently signed rookie scale extensions, something 10 players did in 2020.

The “poison pill provision” arises if a team extends a player’s rookie scale contract, then trades him before the extension officially takes effect. It’s not a situation that arises often, but it features its own set of rules, since extensions following rookie contracts often create a large gap between a player’s current and future salaries.

For salary-matching purposes, if a player is traded between the time his rookie contract is extended and the start of the following league year (when that extension takes effect), the player’s incoming value for the receiving team is the average of his current-year salary and the annual salary in each year of his extension. His current team, on the other hand, simply treats his current-year salary as the outgoing figure for matching purposes. 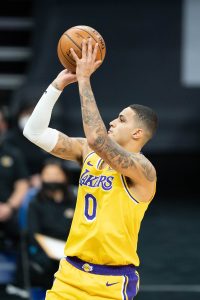 If the Lakers sought to trade Kuzma this season, the poison pill provision would complicate their efforts. From Los Angeles’ perspective, Kuzma’s current-year cap hit ($3,562,178) would represent his outgoing salary for matching purposes. However, any team acquiring Kuzma would have to view his incoming value as $10,640,545 — that’s the annual average of the four years and $42,562,178 he has left when accounting for both his new and old contracts.

As we explain in our glossary entry on the traded player exception, NBA rules dictate that over-the-cap teams must send and receive approximately the same amount of salary in any trade. So applying the poison pill provision to a player like Kuzma and creating a $7MM+ discrepancy between how two trade partners account for him would make salary-matching much more difficult than usual, especially since so many teams this season are hovering around the luxury-tax and hard-cap thresholds.

Trades involving a player who recently signed a rookie scale extension are already rare. After all, those players are generally young, and a player who signed an extension is promising enough to have warranted a long-term investment. Those aren’t the type of players that teams typically move, so it’s not as if guys like Jayson Tatum, Donovan Mitchell, Bam Adebayo, and De’Aaron Fox would be trade candidates this season anyway.

The poison poll provision further disincentivizes a deal involving one of those recently-extended players by complicating salary-matching rules, making those trades even rarer. In other words, even the players who could theoretically be available just months after signing rookie scale extensions, such as Kuzma or Clippers sharpshooter Luke Kennard, are unlikely to be dealt this season.

Earlier versions of this post was published in 2012 and 2018. Photo courtesy of USA Today Sports Images.