Oklahoma State star and potential No. 1 overall pick Cade Cunningham formally announced on Thursday that he will enter the 2021 NBA draft, writes Cliff Brunt of The Associated Press. 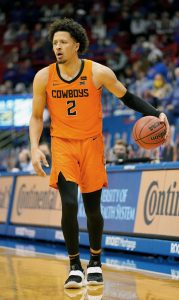 Although Oklahoma State had a relatively early exit from the NCAA tournament, falling in the second round to Oregon State, that 80-70 defeat didn’t reflect poorly on Cunningham, who scored 24 points in the losing effort.

There are a handful of impressive young players expected to join Cunningham at the top of draft boards this year, including Evan Mobley, Jalen Suggs, Jalen Green, and Jonathan Kuminga. However, Cunningham has long been considered by draft experts to be the top prospect in the 2021 class and is the strong favorite to be the first player off the board on July 29.

As Jonathan Givony of ESPN notes in his scouting report of Cunningham, there are still some questions about whether the 19-year-old can be the go-to offensive creator for an NBA team. However, Cunningham’s size, physical tools, improved shooting touch, and defensive versatility make him a potential two-way force, says Givony.