6:45pm: Jokic was the runaway winner, per an official press release from the NBA. 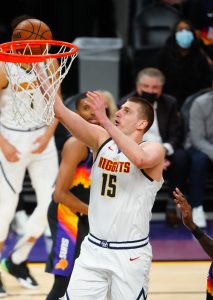 Giannis Antetokounmpo and Chris Paul rounded out the top five finishers, while 10 other players received at least one vote. The only real surprise among that group was Derrick Rose, who, oddly, received a first-place vote.

Jokic averaged a career-high 26.4 points, 10.8 rebounds and 8.3 assists per game this season. In an era in which players are regularly given nights off for rest, Jokic showed his toughness and durability by appearing in all 72 regular-season games.

As the 41st selection in the 2014 draft, Jokic is by far the lowest draft pick to ever earn the honor. He’s also the first Nuggets player to win the award.

Sixers center Joel Embiid and Warriors guard Stephen Curry were the other finalists for the award.

Embiid averaged 28.5 PPG and 1o.6 RPG but only appeared in 51 regular-season games, mainly due to a knee injury. Curry led the NBA in scoring at 32.0 PPG along with 5.8 APG while playing 63 games.