The Pelicans have made their coaching hire official, announcing today in a press release that Willie Green will replace Stan Van Gundy as the team’s head coach. The team will formally introduce Green at a press conference next Tuesday. 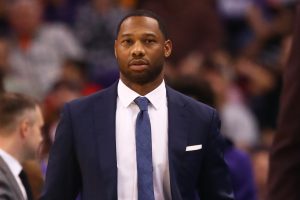 Reports earlier in the month had indicated that Green, a Suns assistant under Monty Williams, was the Pelicans’ choice. As expected, New Orleans waited until after the NBA Finals ended to officially finalize the hiring of Green.

“Willie has established himself as one of the most respected assistant coaches in the NBA. In large part, this is due to a tireless work ethic and authenticity of character,” Pelicans executive VP of basketball operations David Griffin said in a statement. “He brings a vast amount of basketball knowledge and experience to our team as both a coach and former player, along with exceptional leadership qualities and an innate ability to connect with players, staff and fans alike. We could not be more excited to welcome Willie and his family to New Orleans.”

A former NBA shooting guard, Green transitioned into the coaching ranks in 2016, working with the Warriors as an assistant for three seasons before making the move to Phoenix in 2019. He had been on Williams’ staff for the last two years and reportedly talked to the Wizards and Magic about their head coaching vacancies before zeroing in on the Pelicans’ job.

Bucks assistant Charles Lee and Pelicans assistant Fred Vinson were among the other candidates considered by New Orleans during the team’s search for a replacement for Van Gundy, who was let go after a single season. Nets assistant Jacque Vaughn was also at or near the team’s list early in the process, but withdrew from consideration to remain in Brooklyn.