AUGUST 13: The Clippers have officially re-signed Batum, the team announced today in a press release. 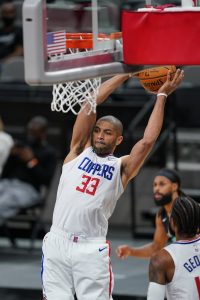 “Nico is a terrific player, a selfless teammate and a consummate professional, who lifts us in a lot of different ways,” president of basketball operations Lawrence Frank said in a statement. “He fit in perfectly from the beginning, and we’re grateful he’s chosen to return.”

AUGUST 2: Forward Nicolas Batum has agreed to re-sign with the Clippers on a two-year contract, Shams Charania of The Athletic tweets. The contract includes a player option in the second year, Ohm Youngmisuk of ESPN tweets.

Los Angeles held Non-Bird rights on Batum, allowing the team to re-sign him for $120% of his minimum salary. By utilizing those rights, per Andrew Greif of The Los Angeles Times (Twitter link), the Clippers still have the $5.9MM taxpayer exception at their disposal.

It’s a coup for the Clippers, who were expected to face plenty of competition for Batum’s services, including from Portland, Golden State, Miami, and Indiana

Batum began his career in 2008 with Portland.