After sending out a series of press releases today to announce their free agent signings and the acquisition of Russell Westbrook, the Lakers issued one more announcement on Friday night, stating that they’ve signed head coach Frank Vogel to a contract extension. 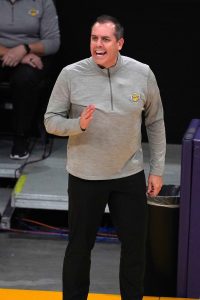 Vogel, who previously coached the Pacers and Magic, was hired by the Lakers in 2019 and led the team to a championship in his first season at the helm.

In total, Vogel has recorded a 94-49 (.657) regular season record since arriving in Los Angeles and has put up an 18-9 mark in the postseason. He has turned the Lakers’ defensive unit into one of the league’s strongest — the club finished third in defensive rating in 2019/20 and first this past season, despite LeBron James and Anthony Davis missing several weeks of action.

Vogel’s contract with the Lakers only covered three seasons, so he would’ve been entering a contract year if not for his extension. The new deal will ensure that the Lakers’ head coach doesn’t enter 2021/22 on a “lame-duck” deal.

Still, it will be interesting to learn how many years the new extension covers. Veteran NBA reporter Marc Stein wrote earlier today that he had heard some “increasingly pessimistic rumbles” about the odds of Vogel receiving more than a one-year extension.