AUGUST 14: Chiozza’s signing is official, the Warriors announced (via Twitter).

AUGUST 9: The Warriors will ink free agent point guard Chris Chiozza to a one-year contract, per Adrian Wojnarowski of ESPN (Twitter link). Anthony Slater of The Athletic adds (via Twitter) that Chiozza’s contract will be a two-way deal. 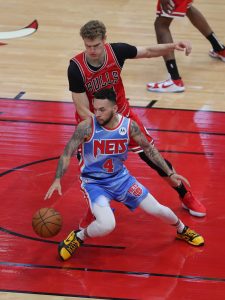 After going undrafted in 2018 out of Florida, the 5’11” guard logged time with the Wizards, Rockets, and Nets between 2018-21, playing in both the NBA and the G League for all three clubs.

Most recently, after spending part of the 2019/20 season with the Nets on a two-way contract, Chiozza returned to Brooklyn ahead of the 2020/21 season.

Chiozza did not carve out a consistent roster spot during his most recent season with a Brooklyn club loaded with backcourt options. He appeared in 22 games with the Nets, averaging 4.0 PPG, 3.0 APG and 1.1 RPG across 10.5 MPG.

As a two-way player, Chiozza can only suit up for a maximum of 50 games with Golden State, and will likely spend portions of the season with the team’s NBAGL affiliate, the Santa Cruz Warriors.

Woj opines that Chiozza will have a chance to compete for some rotation time as a reserve point guard for Golden State, as there’s no clear-cut backup to All-Star Stephen Curry on the roster. Gary Payton II and Mychal Mulder are on non-guaranteed contracts, while Jordan Poole saw some time at the point last season and also should be in the mix.