Hoops Rumors is breaking down the 2021 offseason for all 30 NBA teams, revisiting the summer’s free agent signings, trades, draft picks, departures, and more. We’ll evaluate each team’s offseason moves, examine what still needs to be done before opening night, and look ahead to what the 2021/22 season holds for all 30 franchises. Today, we’re focusing on the Indiana Pacers.

It was a disastrous 2020/21 season in Indiana, where the Pacers – who cited former head coach Nate McMillan‘s lack of postseason success when they let him go – underperformed to such an extent that they didn’t even make the playoffs under new coach Nate Bjorkgren, losing a play-in game to Washington to end their season.

Injuries could be blamed at least in part for the Pacers’ letdown of a year. Key players like Myles Turner, Domantas Sabonis, and Malcolm Brogdon all missed double-digit games. T.J. Warren was sidelined for nearly the entire season. And Caris LeVert, acquired in the four-team trade that sent Victor Oladipo to Houston, was forced out of action when he was diagnosed with renal cell carcinoma of his left kidney following what was supposed to be a routine physical. 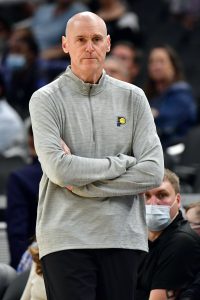 Still, Bjorkgren, a veteran assistant coach, didn’t adjust well to the top job, rubbing those in the organization the wrong way with an abrasive approach to leadership. The Pacers parted ways with him after just one year, with president of basketball operations Kevin Pritchard acknowledging he made the wrong call in last year’s head coaching search.

This time around, the coaching search was far narrower in its scope, as the Pacers zeroed in quickly on a familiar face. Rick Carlisle, who coached the team from 2003-07, has returned to Indiana and will try to get a team that had five consecutive playoff appearances prior to 2021 back on track.

The Pacers appear to be betting heavily on Carlisle’s ability to get more out of the team’s core players than Bjorkgren did last season. Despite some rumblings that the front office would consider trading Turner, Brogdon, or another one of Indiana’s other starters, the club actually had a fairly quiet offseason in terms of player movement.

The biggest name to be traded was Aaron Holiday, who never gained the sort of role he wanted in Indiana and had been the subject of trade rumors for a while. The Pacers sent him to Washington in a deal for the No. 22 pick, which was used on Kentucky center Isaiah Jackson.

Unlike No. 13 overall pick Chris Duarte, Jackson probably isn’t ready for regular minutes as a rookie. While the Pacers raved about the big man’s energy and athleticism during training camp, he’s still just 19 years old, nearly five full years younger than Duarte, who was viewed as one of the most NBA-ready players in the 2021 draft class. There’s no reason the former Oregon sharpshooter can’t become a fixture in Indiana’s rotation immediately, and he should provide a boost to a team that ranked in the middle of the pack in three-point attempts and percentage last season.

Duarte’s ability to hit outside shots and space the floor will be crucial, since Indiana lost Doug McDermott, one of the NBA’s top marksmen. McDermott had a career year in 2020/21, but entering the free agent period, there was a sense that his price tag would be too high for the Pacers, who were expected to prioritize re-signing point guard T.J. McConnell. That turned out to be the case — while Indiana got McConnell back on a deal that pays him $8.4MM annually, McDermott signed for nearly $14MM per year in San Antonio.

The Pacers will miss McDermott’s shooting, but if Duarte proves he’s ready to contribute immediately, the drop-off shouldn’t be too significant, and the team was able to re-sign McConnell and add free agent wing Torrey Craig for a lesser combined cap hit than McDermott’s. McConnell and Craig are tough veterans who will help stabilize a defensive unit that experienced a dip in production last season after back-to-back top-six finishes.

Indiana is counting on Carlisle’s influence and some better injury luck to fuel a bounce-back year in 2021/22. Even if they’re right about Carlisle’s potential impact, there are early signs that the injury bug that plagued the Pacers a year ago isn’t done with the team yet.

LeVert and T.J. Warren aren’t expected to be ready for the start of the season, Brogdon is banged up, and underrated wing Edmond Sumner sustained an Achilles tear that prompted the club to trade him in a salary-dump deal in order to create some extra breathing room below the tax line.

There’s enough talent on the Pacers’ roster that a return to the postseason in 2022 is a very realistic goal, especially if Carlisle can get more out of the Turner/Domantas Sabonis frontcourt pairing than his predecessors did. But Indiana’s offensive upside is limited if Warren and/or LeVert aren’t at 100%, and it’s hard to shake the feeling that some personnel changes may be required to unlock the full potential of the roster.