Jazz center Udoka Azubuike underwent successful surgery on Friday to repair multiple ligaments in his right ankle and foot, the team announced. He’ll miss the rest of the 2021/22 season. 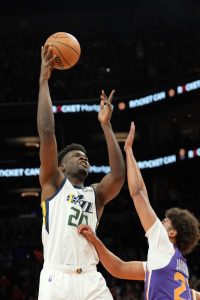 Azubuike appeared to suffer a dislocated ankle in a G League contest on March 10, his third right ankle injury in the past 13 months. He had a partially dislocated ankle back in November and a severe ankle sprain in February of 2021.

In 17 games this season, the second-year big man averaged 4.7 points and 4.2 rebounds in 11.5 minutes per night while shooting 75.5% from the field. He appeared in just 15 games as a rookie last season, logging a total of 57 minutes.

After four seasons at Kansas, Azubuike was the 27th pick in the 2020 draft. Although his NBA run has been brief, the 22-year-old has shown flashes of upside — as Eric Walden of The Salt Lake Tribune notes, Azubuike averaged 9.7 points, 8.3 rebounds, and 1.2 blocks over a six-game stretch between February 2-14.

Since Azubuike was behind Rudy Gobert and Hassan Whiteside on Utah’s depth chart, his absence won’t have much of an impact on the team’s playoff push, but obviously it’s a tough setback for the young center and hopefully he’s able to recover quickly.

At 45-28, the Jazz are currently the No. 4 seed in the West, but their hold on that spot is tenuous, as the Mavs have an identical record and the No. 6 Nuggets and No. 7 Timberwolves trail the Jazz by 2.5 and 3.5 games, respectively.