The Bulls have officially announced that point guard Lonzo Ball will miss the rest of the 2021/22 season, confirming the news in a press release. Multiple reports on Tuesday indicated this was the likely outcome. 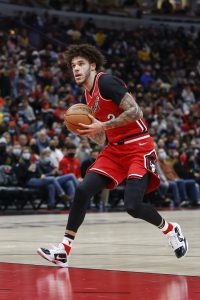 According to the Bulls, Ball – who underwent left knee surgery on January 28 – is still experiencing pain when he engages in high-level physical activity. The plan is for him to continue receiving daily treatment and progressing through rehab as he prepares to return for the start of the 2022/23 season.

Ball has been out since January 14 after suffering a bone bruise and torn meniscus in his left knee. The team initially estimated a six-to-eight week recovery timeline, but Ball experienced a couple setbacks during that process and ultimately ran out of time to get healthy and ramped up.

Acquired in a sign-and-trade deal with New Orleans last offseason, Ball played a major role in Chicago’s impressive first half. He started 35 games at point guard, averaging 13.0 PPG, 5.4 RPG, 5.1 APG, and 1.8 SPG with a .423 3PT% and solid defense.

As K.C. Johnson of NBC Sports Chicago writes, the Bulls have noticeably missed Ball’s “swagger” and his ability to make an impact on both ends of the court. The club had a net rating of +3.1 and a defensive rating of 107.0 with Ball on the floor, compared to -1.6 and 114.5 without him.

If the Bulls, who have slipped to No. 6 in the East, are going to make any noise in the postseason, they’ll have to do so without Ball. Had they been fully healthy, the Bulls might’ve employed a closing lineup of Ball, Alex Caruso, DeMar DeRozan, Zach LaVine, and Nikola Vucevic. According to Johnson, that group had a +12.5 net rating this season, but only played 95 minutes together.

Ball’s contract with the Bulls includes two more guaranteed years, with a player option for 2024/25, so he’ll remain a crucial part of their long-term core going forward.

9 thoughts on “Bulls Officially Rule Out Lonzo Ball For Season”