For the team receiving the player, however, the full cap hit still applies. So even though a player on a $10MM non-guaranteed contract would count as $0 for outgoing purposes, he’d be considered $10MM in incoming salary to the team acquiring him. 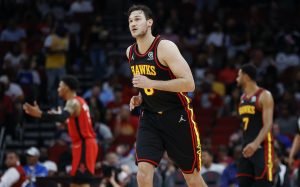 Since over-the-cap teams must match salaries in trades within a certain percentage, this rule is worth keeping in mind when considering a handful of possible trade candidates this summer.

For example, the Hawks have Danilo Gallinari under contract for $21.45MM in 2022/23, but only $5MM of that amount is guaranteed. As a result, Atlanta wouldn’t be able to use Gallinari as the primary salary-matching piece in a deal for, say, Jerami Grant and his $20MM+ salary this offseason unless they significantly increased Gallinari’s partial guarantee (to $15MM+).

As it stands, Gallinari’s $5MM partial guarantee would be enough to net the Hawks a player earning up to $8.85MM. However, since Gallinari’s incoming salary to a new team would count as $21.45MM, that team wouldn’t be permitted to trade only an $8.85MM player for Gallinari unless it had the cap room necessary to accommodate the forward’s full $21.45MM cap hit.

For an over-the-cap team, acquiring Gallinari would mean sending at least $16.45MM in outgoing salary, which the Hawks wouldn’t be able to accommodate using only Gallinari’s $5MM partial guarantee.

This rule affecting non-guaranteed contracts applies even if the Hawks were to trade Gallinari before the 2022/23 league year begins on July 1. Once Atlanta’s season ended, Gallinari’s ’22/23 partial guarantee replaced his ’21/22 salary as his new outgoing salary for matching purposes. So the Hawks can’t circumvent the rule by moving Gallinari during or before the draft.

The Hawks are hardly the only team affected by the trade rules for non-guaranteed salaries. Kelly Oubre (Hornets), Mason Plumlee (Hornets), Danny Green (Sixers), Eric Bledsoe (Trail Blazers), Josh Hart (Trail Blazers), and Kentavious Caldwell-Pope (Wizards) are among the players with partially guaranteed or non-guaranteed salaries who won’t be especially useful as trade chips unless their guarantees are increased or they’re sent to teams with the cap room to absorb their full salaries.

The smaller a player’s salary and the smaller the gap between his guarantee and his full cap hit, the easier these rules are to work around.

For instance, Plumlee has a $9.08MM salary for next season, with a $4.26MM partial guarantee. If he were swapped for a player earning $7MM, both teams would meet the salary-matching requirements. It wouldn’t be so easy in a trade involving a player like Bledsoe, since the gap between his partial guarantee ($3.9MM) and his full cap hit ($19.38MM) is so substantial.