JULY 20: The hiring of Korver is official, the Hawks confirmed today in a press release. He’ll be involved in creating and overseeing a development plan for each Hawks player, the team explained in its announcement. 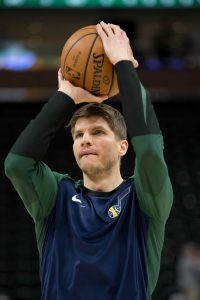 “We are excited to bring Kyle back to the Hawks,” Hawks GM Landry Fields said in a statement. “He is a tremendous person and someone whose presence will benefit all of our players, both on and off the court, drawing from his unique experiences over his 17-year playing career, as a late-second round pick who later became an All-Star in Atlanta and one of the league’s all-time best shooters.”

JULY 19: The Hawks are hiring Kyle Korver to a front office position, Shams Charania of The Athletic tweets. Korver will have the title of Director of Player Affairs and Development, per Lauren Williams of the Atlanta Journal-Constitution (Twitter link).

Korver served as a Nets player development coach last season after a lengthy playing career that began in 2003 and ended after the 2019/20 season. He played for six organizations, including the Hawks from 2012-17. He made the All-Star team while playing for Atlanta in 2015.

The 51st overall pick in the 2003 draft, Korver appeared in a total of 1,232 regular season games – and another 145 postseason contests – for the Sixers, Jazz, Bulls, Hawks, Cavaliers, and Bucks. He averaged 9.7 PPG and 3.0 RPG in 25.3 minutes per game and was one of the top long-distance shooters of his era, knocking down 42.9% of his three-pointers during his career.