In an expansive interview with Mike Singer of the Denver Post, new Nuggets reserve center DeAndre Jordan spoke about his hopes for his 2022/23 tenure in Denver. 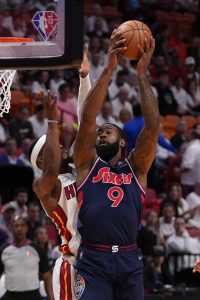 According to Jordan, a recruiting pitch from Denver forward Jeff Green – who was previously Jordan’s teammate on the Nets and Clippers – and a lengthy conversation with head coach Michael Malone helped convince the veteran center to make the leap to another contender, following a 2021/22 season split between the Lakers and Sixers. The 34-year-old, on the cusp of his 15th NBA season, inked a single-season deal with the Nuggets in the hopes of winning a title.

A former All-Star and two-time All-NBA Third Team honoree, Jordan is well aware of what his role with his new club will be.

“Obviously everybody knows that Nikola (Jokic) is the head of the snake,” Jordan said. “So with that, my role being obviously coming off the bench, helping our second unit with pace, screens and getting guys open, getting guys better shots and also finishing everything that I can in transition, offensive rebounds, controlling the glass for our unit, also being a defensive presence for however long I’m out there.”

Despite recent evidence to the contrary in his stops with the Nets, Lakers and Sixers, Denver is optimistic that Jordan can roll back the clock to somewhat resemble his All-Defensive First Team self, when the 6’11” vet was a productive, rim-running force on offense and a mobile athlete on defense.

Here are more highlights from the interview, well worth a read: