NOVEMBER 26, 7:14am: Hayward will be evaluated on a week-to-week basis going forward, agent Mark Bartelstein tells Adrian Wojnarowski of ESPN. 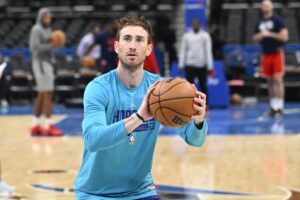 According to Charania, Hayward is in the process of getting more testing done to reveal the full extent of the injury.

Hayward missed eight consecutive games earlier this month after suffering a left shoulder contusion on November 2. He returned on November 18 and had played three straight games prior to Friday’s victory over Minnesota, in which he was sidelined with the shoulder injury.

The 32-year-old had been a mainstay in the Jazz’s lineups prior to joining Boston as a free agent in 2017. Unfortunately, he suffered a severe ankle injury in his first game with the Celtics, and injuries have continued to plague him ever since — from 2017-22, he averaged just 43.6 games per season.

Jalen McDaniels started in place of Hayward Friday night, and players like P.J. Washington and Kelly Oubre should continue to receive a heavy workload. Second-year big man Kai Jones also received a major uptick in playing time — he played double-digit minutes (28) for the first time in his career on Friday, recording career highs of nine points and 12 rebounds.

19 thoughts on “Gordon Hayward Out Indefinitely With Left Shoulder Fracture”