Grizzlies starting center Steven Adams is expected to miss three-to-five weeks after spraining the PCL in his right knee on Sunday against Phoenix, Memphis announced (via Twitter). 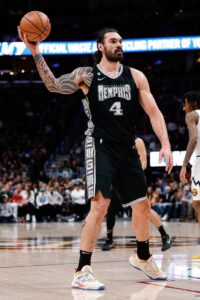 According to Damichael Cole of The Memphis Commercial Appeal (Twitter link), Adams was injured on the final play of the two-point loss to the Suns.

Considering how physical his game is, you would expect Adams to have a lengthy injury history, but he has actually been quite durable — he has played 76-plus games in six of his nine seasons leading up to 2022/23, missing a career-high 14 games two years ago with New Orleans. Unfortunately, he’s likely to exceed that total over the next handful of weeks.

The 29-year-old had been especially great on the boards recently, averaging 14.0 rebounds (5.8 offensive) over his past 15 games (27.6 minutes). The Grizzlies are the top rebounding team in the league in part due to his efforts.

With Adams sidelined, Xavier Tillman and Brandon Clarke should see more frontcourt minutes. Memphis is currently 31-16, the No. 2 seed in the West.